"Maggie"  Pesky[1] (Jessica DiCicco) is a 13-year-old fly and is the second eldest of the Pesky siblings. Maggie dreams of being a famous rockstar and plays often on her pink double neck guitar, and she even bends the rules to make her dream become reality. She also have Psychic Visions which lets her have the power to see into the future. She always gets herself in sticky situations, such as become a member of Buzzdale Academy's all clubs to avoid a math test.[2] Her best friend, Rayna Cartflight, often helps Maggie with her plans, although Rayna sometimes opposes the schemes.

Maggie is a student at Buzzdale Academy in Stickyfeet. Her home teacher is Mrs. Wingston, who is also her math and science teacher.[2][3] Her history and drama teacher is Mr. Bugspit.[4][5]Principal Peststrip is always after Maggie and waiting for her to bend the rules so he can nail her.[6]

Maggie's rival, Dawn Swatworthy, is Buzzdale's snobby cheerleader who often tries to sabotage Maggie and Rayna.[7] Maggie once had a crush on Aldrin's friend Troy, a math tutor. He thought that Maggie and Rayna were too immature and was unimpressed by their advances.[8] Another of Maggie's crushes was Brad Montergoe, Pupert's scout leader.[9]

Not much is known about Maggie's early childhood. A baby picture of her as a maggot is shown in "The Candidate." When Maggie and Rayna were around 4 years old, they painted together in kindergarten. Rayna had a dream of being an artist, only to be weak to criticism.[10]

It is revealed that Maggie took Aldrin's place as uncle Zeb's favorite child when she was around 7 years old.[11]

Maggie once worked at the gourmet restaurant Le Termite, a restaurant for termites. The food is made of wood. After Maggie got fired, she wanted to work at Buzz Burger, the fast food restaurant Aldrin works on.[12] In the episode "Sick Days, Inc.", Maggie and Rayna opened their own business.

Maggie has her own pink cute double neck guitar. She has written a song to The Flaming Moths' lead singer Gunther.[13]

Maggie is very cute, spunky and ambitious. Although good at heart, she can be rather selfish or manipulative if it helps her achieve something she wants. Her defining characteristic is her dream of becoming a famous rockstar, which she often fantasizes about. In Land of the flea, she sleeps in a bunk bed with Pupert Pesky while she takes the top.

Maggie had a small career in "The Price of Fame", when Pupert wanted her to sing "Lucy", the song he wrote to his crush. Maggie performed the song at Show and Tell in Pupert's class, but everyone thought it was lame and boring. Then Maggie started singing a new song she made up at that moment, "Tony the Tick". Later, Maggie promised to sing Pupert's song on Lucy's birthday party, but, all the kids wanted Maggie to sing "Tony the Tick" and Maggie's "manager" said that "what these kids love about you is that you skip the sacky songs and goes right to the big part!". After the party, Maggie promised, once again, that she will sing Pupert's song, but this time just for Lucy. They decided that Maggie would sing it at the playground. But Maggie could not make it, because all her fans chased her all over Stickyfeet. When she finally got there, Lucy had left and Pupert was really sad. Later, Maggie performed at Cheese E. Mc Buzzy's in front of all her fans. She saw how sad Pupert was, and she finally sang "Lucy". When she started singing, all of her fans left and her career was over.[14]

The Pesky family has a secret tradition of clogging. At every family meeting, they clog. Maggie thinks this is extremely embarrassing and is not into clogging like all the other family members.[15] Her aunt Florence made them compete in a talent show. Maggie couldn't let anyone to know her clogging secret, so she dressed up all her family members to rockstars and called themselves "Cloggers X" ("Clog on Log"). Later, they became famous as "the mysterious Cloggers X" ("Clog on Log"). Everyone wanted to know who they really were. Florence was the one who revealed everything.[15] "Pesky's Unclogged" was the second episode Maggie got famous, and then was left without any fans in the end.

Maggie wears a cyan shirt with a white star, orange-yellow skirt, hot pink socks, and black boots and hot pink hair. In the episode “The Candidate”, Maggie is revealed to have pads on the soles of her feet. she's got no bellybutton at all.

Maggie and Aldrin are rivals most of the time. They are fighting and playing pranks on each other. Aldrin thinks that Maggie needs to learn a few things about being famous. But he is sometimes on Maggie's side, when they are playing pranks on their little brother Pupert.[16] Maggie and Aldrin both want to be uncle Zeb's favorite relative, as "the red favorite hat" prove. [11]

Pupert and Maggie are most likely friends, but Maggie often uses him for her own wants and needs.

Being a baby, Bella can just say "goo" and "gah". Maggie wanted Bella in a sister act for a baby food commercial.

Maggie has a brief relationship with her parents. Because of her insane plans, she often gets in a lot of trouble. Chauncey and Frieda understands Maggie and are just punish her if she really deserves it.

Rayna and Maggie has a different kind of best friend relation. Sometimes they are best friends, and sometimes they are kind of enemies, because of Maggie's often selfish needs but Rayna's no perfect either. Just like Rayna, she can whistle, as seen in the episode: Sick Days, Inc..

Both Maggie and Rayna had a crush on Troy, a math tutor at Buzzdale. But he was not interested in younger immature flies, so Maggie and Rayna decided to show him how mature they were. They failed their math test so they could be tutored by him, and a war between them started. Maggie got an A+ on a test and did not have to be tutored anymore. But then she found out that Rayna made her test. Later, Maggie went to Rayna's house and Mrs. Cartflight said that Rayna was tutored at the beach. When Maggie arrived a fight between her and Rayna started. They tried as much as possible to show Troy that they were not immature, but after all, he thought they were even more immature. Maggie and Rayna decided to don't care about him anymore and they were friends again.[8]

Maggie took Pupert to his Fly Scout meeting and she saw Brad play with the kids. She thought that he was good-looking and then he walked to her. They talked and he asked her out. Then Maggie saw Brad putting on his scout uniform and her head explode in fear. Later, Maggie told Rayna the whole situation and Rayna said that "the Fly Scouts is an evil organization!". Maggie did not gave up, she changed the scouts' uniforms to something cooler. Then the scout president made an unexpected visit at a scout meeting, and Brad got fired as the scout leader because of the uniforms. The president later decided that Brad would come back, if Maggie could play some songs on her guitar. Later, Maggie had to sing songs and play her guitar with false teeth and a pair of silly glasses.[9]

Brittany Miller (Alvin and the Chipmunks)

Portia Gibbons (The Mighty B!)

"Fantascious" is the only catchphrase used by Maggie. Sometimes she says "fantabulous" or "fabulicious". 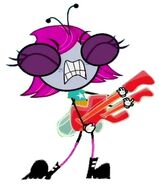 Before she was 12, Maggie was originally a girly girl 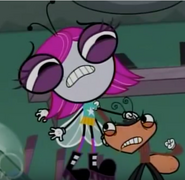 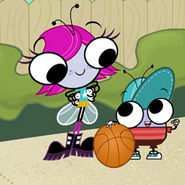 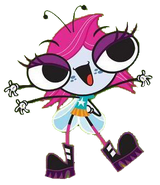 Add a photo to this gallery
Retrieved from "https://buzzonmaggie.fandom.com/wiki/Maggie_Pesky?oldid=6392"
Community content is available under CC-BY-SA unless otherwise noted.